In 2016 NCCI is continuing to enhance coordination and information sharing in the central region of Iraq, which includes the governorates of Baghdad, Anbar, Salah ad-Din, Diyala, and Babel.  Through its coordination hub in Baghdad, NCCI runs a number of coordination activities and also supports the efforts of UNOCHA and the Clusters.

On the 26th of January, NCCI held the first monthly security working group meeting of the year to discuss safety and security updates and current trends. Eight NGOs attended this meeting.  On the 8th of February, NCCI organized a joint general coordination meeting with UNOCHA. The meeting was attended by 36 organization (including 21 local NGOs) working in Baghdad, Anbar, Salah ad-Din, and Diyala. During the meeting, OCHA presented both the government response and humanitarian response plan (HRP) for 2016, while NCCI led the discussions on coordination needs and presented its updated access map with IDP routes in Anbar.

In Baghdad NCCI also provided support for several cluster events (six meetings and two workshops) which were organized by a number of clusters, including the Food Security, WASH, Emergency Livelihoods & Social Cohesion and Education clusters. NCCI’s efforts enabled tens of NGOs, especially national ones, to actively participate in the coordination and planning of the humanitarian response. On the 16th of February NCCI also supported the first Humanitarian Access Working Group meeting led by UNOCHA. 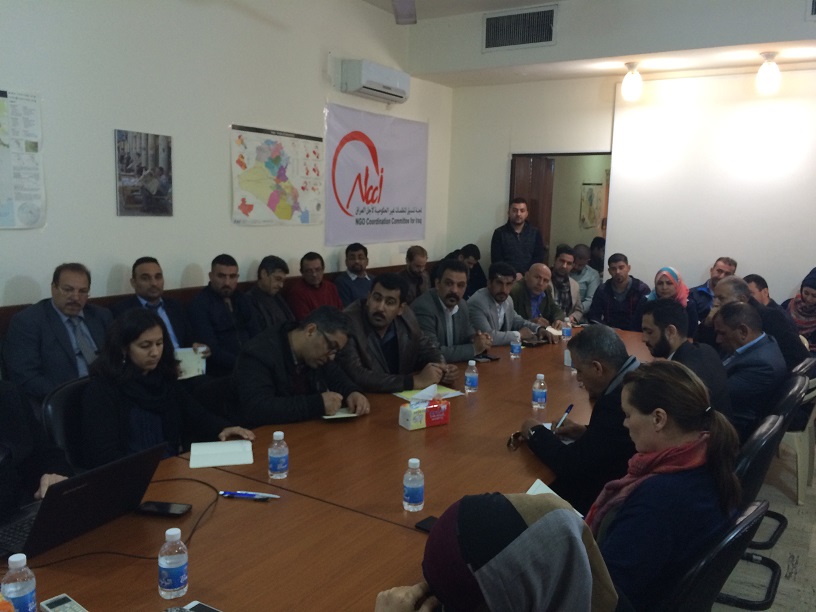 As part of its capacity building project in partnership with UNICEF, NCCI organized and hosted two meetings to enhance coordination between the ten WASH Service Centers which are run by local NGOs, and cover the governorates of Anbar, Baghdad, Babel, and southern Salah ad-Din. The partners were also invited to the WASH cluster events to increase their cooperation with other actors.

In the coming period NCCI will continue to organize regular coordination and capacity building events to optimize the humanitarian coordination and response in the central region. For more information about NCCI’s events and activities in central Iraq you can contact us at .

Read 2211 times
Tweet
Published in NCCI Updates
More in this category: « Building the Capacity of Local NGOs Working in Emergency WASH Intervention First Coordination Meeting in Basra »
back to top